Jade was born in the Commonwealth in 2256. Growing up in a small shack out in the Wasteland, life was never easy for her and her family.

Jade learned to fire a gun at an early age, and over the years became skilled with a wide range of weapons.

At the age of 8, a band of raiders led by a man calling himself "Cancer" attacked the shack. Jade's mother, Karen, made a daring last stand whilst Martin, Jade's father, took the young Jade to safety. The two managed to escape, and Karen was deemed killed.

After escaping the Commonwealth, Jade and her father ended up in the Capital Wasteland, where they settled in a town named Sudley Hollows. There, they tried their best to make a good living, but this too was cut short with Cancer tracking the father and daughter to their new home and burning the place. Martin was killed in front of Jade's eyes, and Jade herself was dragged off as a slave.

During the trip, Jade was set free by Rick, who took Jade with him to Grayditch and raised her for the years to come. In Grayditch, Jade had trouble adjusting, but eventually she became a skilled explorer and tinkerer, learning from example and by trying out new things constantly.

When Cancer attacked again and killed Rick, Jade decided it was enough. She tracked the raiders to their camp and killed them, finally putting a stop to the constant threat Cancer posed to her.

After killing Cancer, Jade crossed paths with Maryland, a Wasteland Ranger camping out in the Capital Wasteland. Maryland taught Jade how to properly survive out in the wild as well as how to make better weapons and becoming a marksman. After spending over a year with Maryland, Jade had grown into a skilled ranger herself. Her time with Maryland was cut short after an accident with a Yao Guai killed Maryland, forcing Jade to move on.

After Maryland's death in 2273, Jade encountered the Brotherhood of Steel and was taken on as an Initiate. Despite only having served with the Brotherhood for a year, her time there had left a deep impression on her, prompting her to continuously continue wearing her Holotags from that point onward, as a reminder of where she came from. During her period with the Brotherhood, she also learnt how to use Power Armor, as well as basic Vertibird controls through simulations.

After she left the Brotherhood following a botched trial mission, Jade signed up with Talon Company. During her time there, she was able to further develop her skills in combat, making her stand out amongst the other soldiers. Eventually, she was tasked with an assault on Capitol Hill, where she continuously held off Super Mutants for three days before being forced to retreat. During the retreat, Jade's officer ordered the soldiers to sack a nearby settlement for supplies. Jade protested, and the disagreement turned into a fight, resulting in Jade killing her officer and leaving Talon Company in 2275.

After Talon Company, Jade moved to Rivet City, where she did everything she could to make up for her mistakes in Talon Company. During her time in Rivet City, she frequently traveled into the Wasteland, scavenging for supplies and dealing with any direct threats to the city.

In early 2277, she was abducted by the Zetans and used as a test subject in the latest IHFM strain. Several months into her imprisonment aboard the ship, she met the Lone Wanderer, whom she accompanied during the escape attempt. After successfully escaping the ship, Jade and the Lone Wanderer continued their journey together.

In 2282, Jade and the Lone Wanderer broke up and went their seperate ways. Jade decided to return to Boston, to begin again in hopes of putting the break up behind her.

During Jade's trip from the Mojave to Boston, her Vertibird was shot down over Denver, forcing Jade to continue on foot. After more than three years, she finally reached the Commonwealth, where she quickly became a nuisance to the local Raiders, Super Mutants and especially the Gunners. Her stealthy tactics and ruthless methods earned her the nickname "Devil", which she took upon herself and turned into "Green Devil", after the nickname her parents always called her. 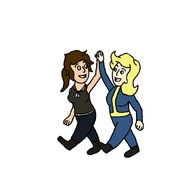 Jade as she appears in the Capital Wasteland.

Jade as she appears in the Commonwealth.

Jade at age 12
Community content is available under CC-BY-SA unless otherwise noted.
Advertisement